Everything We Keep: A Novel is a pure entertainer for the die-hard romance enthusiasts. Kerry Lonsdale makes a very promising debut with thrilling suspense and unexpected twists, in a painful yet magical journey of love. The 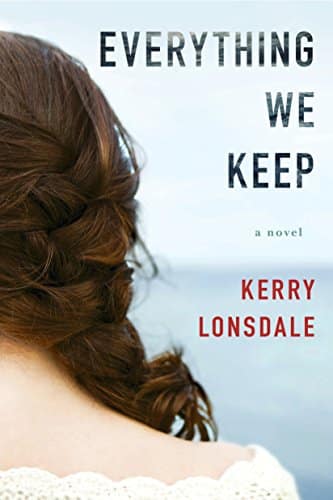 pain of losing someone you love the most, the one that matters and the devastation that follows, Everything We Keep explores all the overwhelming emotions of love.

As the story unfolds, Kerry Lonsdale focuses her minimalistic approach on redemption of love, second chances, and hope. The notion is driven by the euphoria of rediscovering love, and how the heart skips a beat upon learning the truth about the ones we hold dear and things we do for love!

As life goes on we encounter a lot of situations, people, and relationships. We embrace a few and let go of a handful, although we can’t control the course of the universe we hang to the memories that make the moment last a lifetime. One such sweet memory is your first crush, your childhood sweetheart, your first love. We bet no one will ever forget their first someone special that changed their world completely, introducing them to a series of chemical, hormonal, emotional changes, a rush of adrenaline, in short, a feeling that they never felt before.

Everything We Keep connects well to this chord in several interesting ways. It depicts undying faith of the bond, the transformation of being buddies to lovers, the realization of being with each other and the innocent belief that this love will last forever. The drama has all the necessary ingredients to keep you glued to the romance, the hardship the protagonist goes through in the name of love and the fact how things are usually a lot more than what meets the eyes. Wouldn’t it make a perfect gift for the special someone?

The entire story of Everything We Keep: A Novel revolves around the central character of Aimee Tierney. Aimee is a twenty-something Sous chef at her family restaurant, a sweet and practical girl whom we absolutely love. Her simplistic approach to life has a perfect plan of marrying her childhood sweetheart and settling down.

The ideal romance setup as we say! But everything goes haywire as Aimee attends her fiancé’s funeral on the very same day they were meant to be married. James Donato, Aimee’s would-be husband vanishes from a boating accident and is presumed dead, leaving her in torment and trauma.

Few days after the funeral, Aimee goes back to her old life as a chef and realizes that her parents are selling the restaurant. They encourage her to move on and start a new life without James. This steers Aimee to drown in the memories of James, her eternal love for him and their dream of being together, forever! Aimee falls into an emotional overdrive leading to depression. Everything We Keep beautiful depicts the moral strength and will of a woman delicately via the character of Aimee, kudos to Kerry Lonsdale.

Meanwhile, when Aimee was just finding her way by leasing a coffee shop meets an interesting guy. A photographer named Ian Collins and he falls for her in no time. But Aimee resists his romantic advances because of the undying faith of James being alive. It almost seems like an invisible battle she fights in her mind every day, a battle she seems to be losing and in the process losing a bit of her. The narration is heart touching, eternal love, and pure romance surely make Everything We Keep: A Novel a page-turner with a surreal portrayal of love and what comes after.

Aimee simply doesn’t stop to believe that James is alive and out there. Her faith never ceases to surprise us, even during tough times. The magnitude of her belief intensifies when she seeks aid from a woman named Lacy, who claims to be a psychic. Surprised? Are we now?

Yes, Everything We Keep: A Novel is a lot more than just a regular romance thriller. The psychic Lacy guides Aimee to join dots for solving the mystery of finding James. Aimee tries several ways to inch closer to her motive, she even contacts a private investigator to look into things, but everything leads to a dead-end.

Almost after 2 years, she finds a new lead all thanks to Lacy. She gives the location where James is kept. The mysterious discovery by Lacy is related to the painting which belonged to James. The collection went missing after his funeral and Lacy put together all the clues to track the cargo and found James.

The next revelation will definitely keep you interested in the ending. James’ location was pinpointed to Mexico and the cartel was also involved! You read it right, Aimee and Ian travel to Mexico to find out the truth. Finally, Aimee hopes she will have some closure.

Thomas, who supported Aimee, was in Mexico and he revealed how James confronted Phil for his dirty business. And in the process, James survived a deadly attack from Phil and the cartel but fell prey to identity disorder, and now he identifies himself as a man named Carlos. James did not know Thomas was already cooperating with the DEA to get rid of Phil so the cover-up was his only way of keeping everyone safe.

Finally, Aimee talks to James as Carlos and comes across about his life. She finds out Carlos has had the life he has always wanted as James. She decides to let Carlos have his identity and leaves things as they are. This gesture from Kerry Lonsdale speaks volumes about the strength the protagonist possesses.

Aimee is heartbroken by losing James but decides to finally move on. She commits to Ian without any more thoughts. Ian reveals the truth of why he accompanied her to Mexico. He did that not just to help Aimee out of love, but to find Lacy. The psychic was the same mystical accomplish who found him when he went missing as a child. Ian is on a mission to find his own mother is desperate to find Lacy.

To our surprise, Ian’s mother is also a victim of identity disorder and has been missing for years now. In the epilogue of the story, Kerry Lonsdale mentions Carlos having some trouble 5 years after the timeline. What happens next? Find out for yourself. Over 5000 reviews mean the end has to be interesting.

The Verdict Of  Kerry Lonsdale Everything We Keep

What is not to love in the story? A fast-paced ending, psychics, Mexican cartel, undying romance, identity disorder, one true love, a little action and a lot of thrills makes Everything We keep a great casual read. With almost 300 pages you are in for a guaranteed journey of love filled with emotions, drama and unexpected endings. Well over 5,000 reviews can be for nothing. What are you waiting for?