One need not be a fan of history to be drawn like a magnet to the inside pages of the best-selling book Beneath a Scarlet-Sky: A Novel by best-selling author, Mark Sullivan. The cover, the title, and the caption are too captivating to ignore.
The book’s invitation is very difficult not to peer into the promised epic story of courage and love in a setting described as one of history’s darkest hours. Knowing the author Mark Sullivan, he alone is enough reason for engagement.

Beneath a Starlet Sky is the riveting, stirring story of a young lad named PinoLella. PinoLell,a who is pushed against his heart’s desire deep into the ravages and horrors of World War II. PinoLella is an ordinary regular Italian boy whose youthful obsession centers on girls, music, and food.
Lella does not want to be involved in the war nor the Nazis. In fact, he is running after a beautiful girl named Anna but when the attempted rendezvous with her is aborted and his ancestral home is bombed by Allied forces, he is forced to find work in an underground railway system.

The Horrors of War

In here, he sees the horrors of war as it is inflicted upon innocent citizens. To save them from the atrocities, he decides to help Jews escape over the Alps. His parents, eager to protect him from danger at such a young age, enlist him to become a German soldier, never realizing this is closer to danger.
At the age of eighteen, he is assigned to serve as the personal driver of General Hans Leyers, one of most powerful commanders of the German High Command, seconding to Adolf Hitler. So, how does his stint in this office plays out?
Related Article

A desire for Meaning?

Here is a golden opportunity presented to him to do spy work for the Allies. In his desire to save innocent lives from being decimated by war, he wages his own war and fight in secret, buoyed up only by his compassion for his fellowmen and his enduring love for Anna and the happy times they dream to have and share someday. The rest of the story will be left for the readers to uncover.

Based on a True Story

The book is based on a true story and the narration itself, as well as the storyline, appears more real than fictional. The main character is alive. The settings are all validated by other people who survived the Holocaust. The story as it is composed is full of actual quotes from PinoLella.
In the narrative exchange between the author and Pino in the Preface, the author narrates how he began writing the book. Lella, in a very unassuming way, even refused to be described as a hero. But any reader who reads the book will find his courage. Lella showes his resilience, and his indomitable spirit as telling descriptions of what a hero is supposed to be.

Mark Sullivan has authored eighteen novels, including the No 1 New York Times bestselling Private series with James Patterson. He was an investigative journalist before he turned to book writing. He lives in Montana with his wife to whom she has remained faithful and grateful for the years they have lived.
There is one aspect that the author shares in the Preface of his book. He confesses an instance wherein he has lost the feeling of significance as a journalist and he could not come up with the right book. It was a spiritual turnaround that led to this book’s writing.

Issues Presented by the Author for the Reader

As it is based on a true story, the book has tremendous historical value. People and places are genuine and the author and the book’s protagonist have confirmed and validated these elements. The book can be a silent reminder and rejoinder about the effects of war and how in the modern milieu, it may be prevented.
It not only exposes the vagaries of war but also questions the motives behind going to war in the first place. The author suggests that more often than not, the motive is not justified.

It also a testament to man’s capacity for rising up to the challenges of his time. It is not always that the horizon is scarlet; in fact, it can remain calm blue. Many readers can relate to the inner feelings and character of PinoLella. His 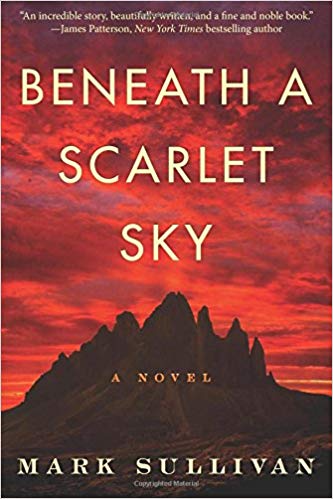 resilience and his faithfulness to the love of his life.
Mark Sullivan book Beneath a Scarlet Sky: A Novel also offers a comparison of how the youth of today and the youth of yesterday would respond to their respective challenges as human beings.

The book tracks history in a fictional form. The author attempts to make the facts of history behave like they are happening right now, and succeeds. The contents are well presented as they are well-researched and rich in actual names of persons and places.
The format is prose, just like a story being narrated, but even filled with actual quotes to make the scenes move and seem alive. Experience the time, for instance, that Lella goes to meet her recently-met girlfriend Anna at the theater. The author expertly presented the story via the exchange between Lella and his brother as they wait for Anna to arrive.
Anna does not arrive, forcing the two brothers to watch the movie, which is ended by a bomb that explodes at the theater’s rear. The dialogue is the author’s handiwork, and they make the story come alive as if the reader is at the theater seated with Lella.

Mark Sullivan book, Beneath a Scarlet Sky: A Novel incites, excites and advocates. It is a good read for anyone who loves the action that rivets. The novel moves hearts that are romantic for it is a love story. It suits readers who love history because it is historical.
Those who love adventure, or who want to see how loyalties can be distorted, the book is it. For readers who want to read through another presentation of the last World War and relive or refresh what happened during that time, the book can be a solid reference material. In short, if you want to be inspired and captivated, grab the book and seek out how it ends.